2017, started with the First Day Hike at Monadnock State Park, hosted by the NH State Parks and NH Forest Society. This was also the last time, Aubrey was carried for a hike. From this day out, we have hung up the carriers and all hikes she did was on her own two feet!

Later in January, we headed north to Lincoln to view the Ice Castle, while this isn’t a hike, it is still an outdoor adventure.

We spent the night at the Days Inn, swam in the pool and went out to eat. The next day, we went to The Kanc Ski area and had a blast on their free tubing hill. We can’t wait to go back this year!

I attended the Society for the Protection of NH Forest Land Steward Training in West Ossipee. I learned all about trail maintenance and protecting our forests. I now volunteer as a Land Steward to the Perry Reservation in Jaffrey/New Ipswich.

Once the weather broke, and spring air made its way, we started tackling mountains again. Pitcher Mountain was the first one we hiked this year.

The second mountain, of the year, was Pack Monadnock, which at the time was Aubrey’s biggest mountain she hiked yet. Little did we know that soon this would be a small feat! 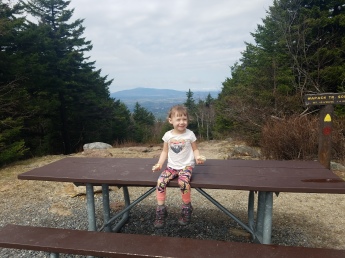 One of the next hikes was West Rattlesnake in Holderness. This was a fun short hike, definitely one that we will visit again when in the area.

Probably one of the worst hikes we did this year (because they can’t all be good) was Red Hill in Moultonborough. This was the last Fire Tower hike we needed to fulfill the NH Fire Tower Quest patch. This hike seemed to drag on and on and while we weren’t moving any slower than normal, it just felt like it took us forever to reach the top. 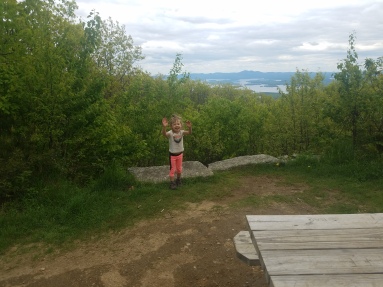 It was also peak black fly season so we had to fight off huge swarms of bugs the entire way.

Then just when we were about done, it started to pour, and of course, we had plans to head north and camp for the next few nights. Pour Red Hill isn’t a favorite in my book, but maybe we will climb it again to see if my view changes.

We met lots of wildlife along the way, the most memorable was when this Porcupine waddled across the trail on Temple Mountain.

We could hear a loud rustle coming from the edge of the trail and this guy showed his face. Aubrey really wanted to pet him, and he probably would have let her.

We spend a week in Lincoln over Fourth of July. We experienced some crazy weather, and the campground we were staying at flooded. It was an awesome experience, seeing how fast the Pemi River could swell up, and how it did not care if it took your tent with it or not. Luckily our site stayed dry and our Pop Up held up to the intense rain. 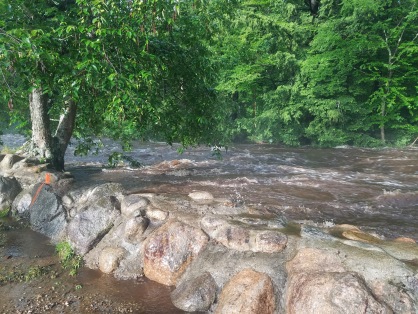 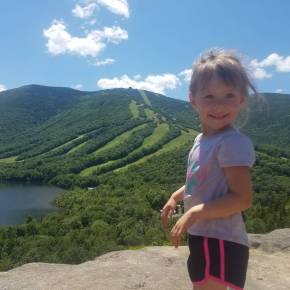 During our week up north, we hiked up Bald Mountain and Artist Bluff, which is a great little hike with some challenging scrambles and we drove up the Mount Washington Auto Road. We got to experience some of that crazy weather you always hear about. When we arrived at the gates, it was sunny and 80 degrees. As we drove up the white-knuckle 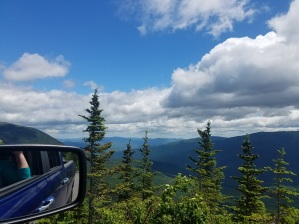 road, the winds picked up and the clouds moved in. It was 50 degrees at the summit with wind gusts reaching 30+ mph. They were strong enough to push Aubrey over!

A few more smaller hikes were Rhododendron State Park and Gap Mountian. We had hiked Gap Mountain the year before, and this year we cut our hike time in half! Aubrey is definitely getting stronger so I decided to do something crazy…. 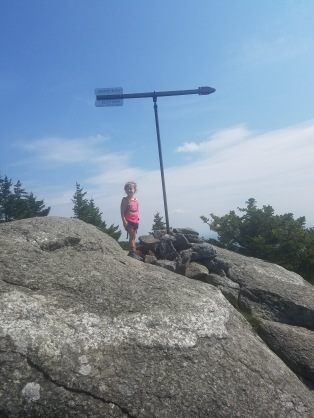 In 2017, we got to experience a partial Solar Eclipse, so Aubrey and I hiked halfway up Mount Monadnock to the Monte Rosa subpeak and watched the eclipse with just a few others who had the same idea to avoid the chaos on the summit.

Aubrey really had been proving how strong she had become, so I decided to do something even crazier than hiking Grand Monadnock. We made plans to hike our first NH 4,000 footer. I chose Mount Jackson a 5.2-mile roundtrip hike with over 2,000 feet of elevation gain. This hike took us a grueling 9 hours, but she did it! Not many 3-year-olds can say they have hiked a 4K peak! 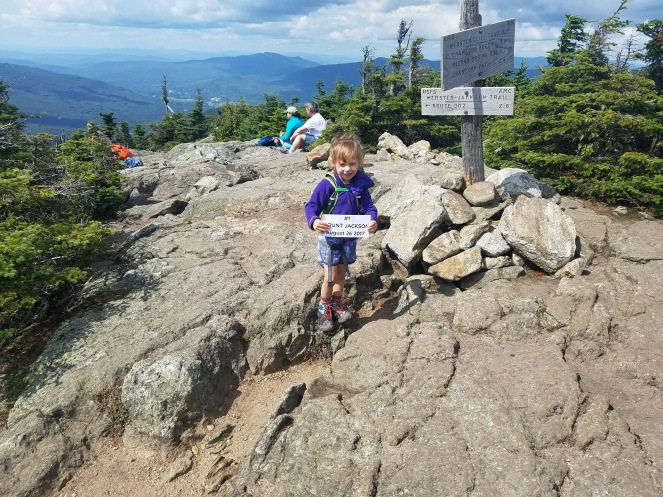 In the end of September, I did something bold. I wanted to go camping but didn’t want to bring the tent, and Gerry wasn’t available to join us. So I took the truck and camper all the way to Lincoln myself. 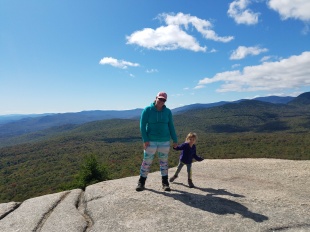 I opted for a pull-thru site, since I have yet to master backing it up. Over the next couple days, Aubrey and I played around the campground and hike Mount Pemi.

One of the last big hikes for 2017 was Welch and Dickey. This 4.5-mile hike has landed itself on My Favorite hikes list. The views from this hike are impressive and it is actually a fairly easy hike. We will visit these mountains again and again!

Also in the fall I began writing articles for Trailtosummit.com, I am excited to share oir experiences and all that I have learned over the last few years with a great audience. 2017 was filled the awesome adventures and I cannot wait to see what 2018 will bring us!

Donate to Adventures with Aubrey

Please consider donating to help offset the costs associated with running and maintaining our website. If we receive donations over our yearly cost to run our page, they will be added to a savings account for future years and/or donated to a non profit that supports nature conservation and/or engaging children in nature.