Monday featured a partial solar eclipse here in New Hampshire. So I wanted to take Aubrey out to a good viewpoint to experience it. I decided on Monte Rosa a subpeak of Mount Monadnock. It would offer a good hike halfway up Monadnock, without having to deal with the crowds that would flock the summit (which I was able to count at least 40 people on the summit with my binoculars!). We procured our Solar Eclipse glasses from my sister in law and made a plan for a noon time hike! 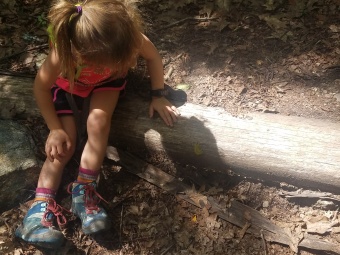 Just after noon, we headed up the Old Toll Road in good spirits which didn’t last long. Aubrey has been getting into this phase of getting upset that Daddy is not with us. This time she was really upset, and the meltdown was big. I ended up calling Daddy for a lifeline and he was able to talk her out of her meltdown. She was still cranky for a most of the road up but once she saw the big house she remembered this hike and asked if we were going to the top of the big mountain again.

We passed through the halfway house site, and Aubrey wanted to take a picture in the chair again, but I told her she needed to wait until the way down as we were running behind schedule and needed to get to the top to see the eclipse. The Monte Rosa trail is just beyond the Old Halfway house site and was easy to find since we were looking for it.I imagine people pass by it all the time and don’t even notice it.

This trail was a lot of fun and is highly underrated for Monadnock hikes. You could tell it was not overly used since the trail was narrow, covered in leaves and we did not see any trash along the way! The trail was nice, a challenge with scrambles, which Aubrey really enjoys.It featured large granite rocks which made for fun photo-ops.

We twisted, turned and climbed our way until we saw the large weather vane come into view.

We made it to the top of Monte Rosa just after 2pm  so the eclipse had already started but wouldn’t hit the 60% peak until 245. There were only two others viewing the eclipse from Monte Rosa so my plan to avoid the crowds worked. We broke out our snacks and glasses and started our eclipse viewing party. At first Aubrey didn’t see what was going on, but once more of the moon’s shadow was passing over the sun she was able to see what we were all looking at and really started to enjoy the viewing. She would run off and play with rocks and then come back to look again. After the peak eclipse, we headed back down.

We reached the intersection of Monte Rosa and Fairy Spring Trail, 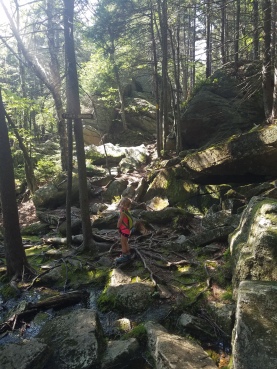 and I decided to take the Fairy Spring Trail back down, as they are the same length and come out next to each other on the White Arrow Trail. Aubrey was excited to possibly meet a Fairy, and ask her to do some magic. Fairy Spring is a small pool and brook that is very mystical looking as the area is covered in moss and water is bubbling through cracks in the rocks. We continued down the trail and passed by a large cave which Aubrey had to explore and play monster in. We then passed the Fosset house ruins and stopped for a picture. After a short distance we were back to the White Arrow trail and Aubrey picked up the pace because she was still determined to get a picture at the rock chair.

She managed to climb up to the chair on her own this time and I snapped a few pictures. We then viewed the last of the eclipse from the Halfway House site.  She exclaimed “It’s back together” when she saw the sun was almost whole again. And we had a rather uneventful walk back down the Toll Road to our cars. It was a fun hike and definitely one we will do again!

Donate to Adventures with Aubrey

Please consider donating to help offset the costs associated with running and maintaining our website. If we receive donations over our yearly cost to run our page, they will be added to a savings account for future years and/or donated to a non profit that supports nature conservation and/or engaging children in nature.

Anyone else? Humor aside, Aubrey's teachers have been amazing. The work they do on a daily basis to keep the kids engaged and connected it outstanding. I love how I can see her assignments at night for the next say so I can plan out our days. So grateful and praying they all have a chance to finish the school year together.
Remote Learning Day 6- Today started with more work with Papa. Aubrey learned the art of Egg Case Fort building. A classic pastime of Mommy's. We also played with some AR animals! Then it was home to do the real school work! #remotelearning #eggs #boxfort #forts #ar #homeschooling #adventuresinkindergarten #adventurelearning #schooloutside #eggcases
Anyone else do a clean sweep of the camera view right before a Google Hangout starts?
Remote Learning Day 3- Today we picked up Aubrey's packet from school. It's filled with worksheets, online log in information as well as some basic school supplies. We had a nice walk on the Rails to Trails, saw ducks, geese and some huge beaver lodges. We came home and got to try out Google Hangouts with her teacher and one other classmate joined in.
#remotelearning Day 1- Today we worked with Papa helping grade and pack eggs. Aubrey learned how to weigh eggs to find their size. Loved watching her "work" just like I did when I was her age!
I'm almost embarrassed to admit, we had never visited Diana's Baths until today. It was a frozen wonderland! #betterthantheicecastles
Starting off school vacation with a nice walk up Pack Monadnock.
"Take a picture of me and my new pet and send it to Mommy" Aubrey said to her Brammy yesterday while visiting ZooTampa. Aubrey is enjoying a week in Florida with Brammy and Great Great while Mommy catches up on sleep back home. #zootampa #zoo #secretsofthezoo #tampa #florida #sunshinestate
Thanks Uncle Joe (@vaillancourtconcrete) for tickets to @dinoworldlive it was a fun show! The puppeteers did a wonderful job making the dinosaurs come alive. Definitely recommend!